Shopping Cart
Your Cart is Empty
Quantity:
Subtotal
Taxes
Shipping
Total
There was an error with PayPalClick here to try again

Thank you for your business!You should be receiving an order confirmation from Paypal shortly.Exit Shopping Cart

These archives go back to April 2016. Only blog posts not related to events that have already occurred will be found here. The most recent prior to updating to this site are at the top and the oldest at the bottom. No other archives from my old wordpress blog will be available.

The exhibition was a great evening in a fantastic venue. Some paintings sold and so many really interesting interactions with those that were viewing my paintings and there were a lot of them!

All the video was shot before the masses descended as we were so busy after that!

Please take a few minutes to share my first exhibition at Miami Marketta.

(ssshhhh I've since been offered a 2 week exhibition, and there are two more next year!)

Soon I will be looking at revamping this website and having a more professional space to showcase my works that are for sale and other items I sell currently on etsy. This is in the works but I will be working that out soon.

Many people ask me,"What sort of art supplies do I need for Art Journalling".

My answer is usually the same, "what do you like working with?" and then I take it from there.

Now that I am teaching in person a lot more I find myself teaching a lot of complete newcomers to art journalling and this in itself forced me to think about what I'd want to start off with and what I really love to use and recommend for quality for everyday use.

Now for the fun part what's my favourite art supplies?

Pencils - prismacolour but if i was to buy another set it definitely would be Luminence by Caran d'Ache. why? prisma are creamy and the loveliest pencils to blend but have been dogged by lower manufacturing standards recently. broken cores upon purchase do not put the buyer in a happy mood to create! The Caran d'Ache Luminence pencils are the only set completely rated as lightfast. This is all about being able to sell your work and have it last. To be honest, coloured pencil art usually takes a lot longer than other mediums to complete an artwork so you don't want your work to waste or fade away. D6901 - The Standard Specifications for Artists' Colored Pencils is the standards set by the Coloured Pencil Society of America.

Pointillism /ˈpɔɪntᵻlɪzəm/ is a technique of painting in which small, distinct dots of color are applied in patterns to form an image. Georges Seurat and Paul Signac developed the technique in 1886, branching fromImpressionism. The term "Pointillism" was first coined by art critics in the late 1880s to ridicule the works of these artists, and is now used without its earlier mocking connotation.[1] The movement Seurat began with this technique is known as Neo-Impressionism. The Divisionists, too, used a similar technique of patterns to form images, though with larger cube-like brushstrokes.[2]

The technique relies on the ability of the eye and mind of the viewer to blend the color spots into a fuller range of tones. It is related to Divisionism, a more technical variant of the method. Divisionism is concerned with color theory, whereas pointillism is more focused on the specific style of brushwork used to apply the paint.[1] It is a technique with few serious practitioners today,[3] and is notably seen in the works of Seurat, Signac and Cross. However, see also Andy Warhol's early works, and Pop Art.

Now I think it's important when teaching to expose your students to different types of techniques.

Pointlism is very time consuming. thousands upon thousands of dots, dashes and circles go into creating a scene. One of my students worked on a 4x4" square of paper and spent 4.5 hours creating a landscape which is truly amazing. it is really a test of patience to do something with Pointilism and I would say one of the reasons why this technque is not more widely used today.

I decided to trial a variant on pointilism which played with the colour and blending aspects of pointilism but i decided to use circles rather than dots and play with inner and outer circles and variations on size. there are no brush or paint pen strokes in this painting that arent circles or eliptical shapes.

All up I spent around 5 hours on this small painting and although i love the light and shade and also the play of red and blue together (I love especially the darker reds and smoky blues together) it's not the usual kind of thing I would put that much time into these days.

I kind of went mad on the shadows and greens here and lost some of the orangy warmth i'd had in the top left of the bouquet. Upon reflection i got out a yellow posca pen and added some yellowy goodness back into the painting and this I think then finishes the piece off nicely. Reiforces what i'm saying that you need to work out when this is finished and with this type of work you can literally fiddle with it endlessly until you tell yourself to stop! 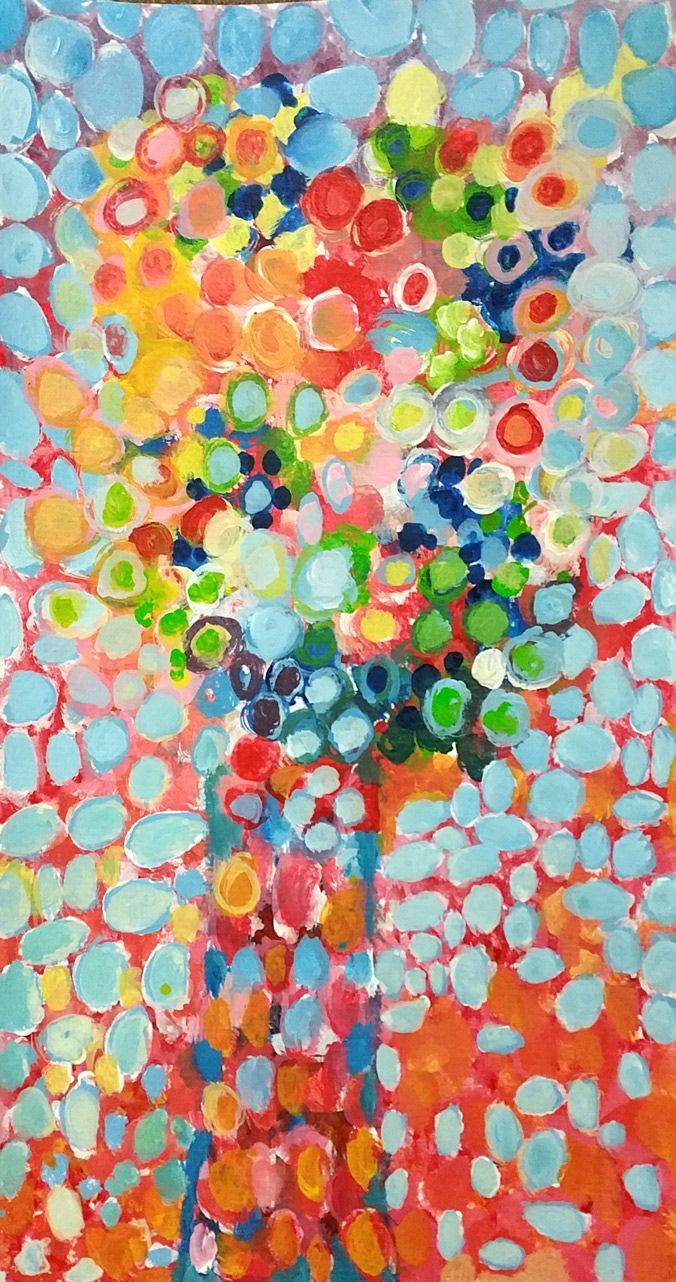 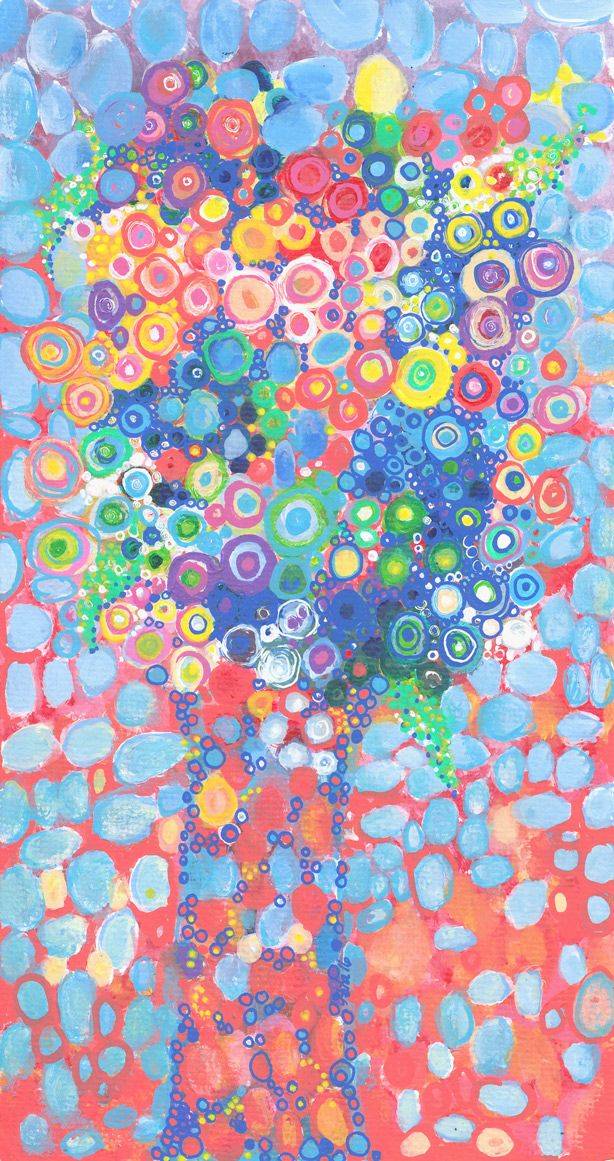 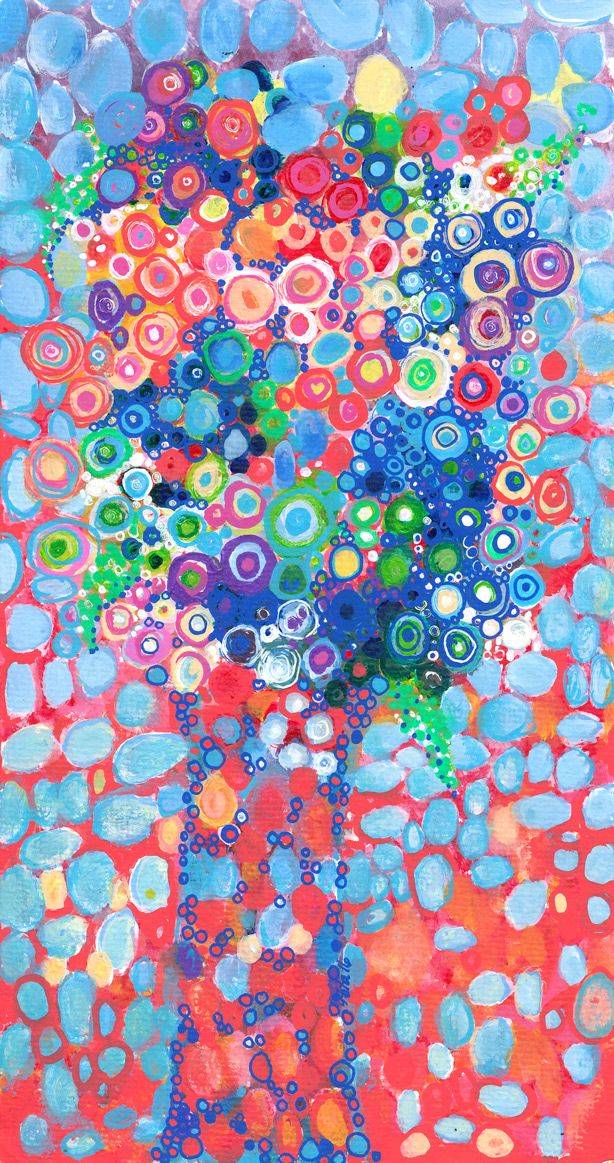 I was doodling during one of my art classes....

asmy students were on a break. As sometimes happens when I'm teaching I find that my creativity works out and I like putting that down on some sort of surface to demonstrate to my students how creativity works and what to do with it when it strikes.

So, while my students were on a break, from learning to draw and construct faces in class, I sat down and started drawing. The following is my progression from that drawing on the first day in class, to 3 subsequent weeks during class until I got the bug to finish her at home where my studio and supplies were.

I sketched the basic drawing, choosing to add in angel wings as to my mind when she fell out the end of my pencil she looked like an angel to me.

Once I'd showed my students the sketch, I then taped that paper to a board as she is A3 in size so that i could show the class something different in shading with my process and the techniques I use to grade my transitions in this type of painting.

I decided to deepen my shadings and had mixed up a different skin tone between the two classes. so i needed to cover her again with a slightly more yellow skin tone and redefine some shadows. Once i'd done that i was really wanting to work on her lips and make them puffy and soft all at once. I spent a good 30 minutes and then on and off adding and subtracting details and shades to the lips with paint.

I also decided since the shading was in pthalo green and pthalo blue that i would give her blue eyes for synergy in the colour scheme. The eyes are my favourite part to do and so i started working on the types of derivatives in pthalo blue that would go into the eyes. I used some golden nikel azo gold to colour the hair underneath and above with some naples yellow mixed with white to tone down the top of the hair. After all there is holy light shining on her!

I also started defining the wings here just some with paint as i knew i wanted to draw in the feathers details with pencil later on. I made sure i used a little gesso in my layers to continue some grittiness for the media to keep working with each layer. The wings are golden paynes grey and white.

At this stage I had really worked on the eyes a lot. I started out with a mild mix of paynes grey and white so that i could layer the white on her whites to give great depth to the whites of the eyes and help them appear to stand out. I wanted her to be looking at the viewer of the picture so worked on her expression to be almost as if she is following you with her eyes.

At this stage I noticed the eyes weren't perfect but determined to slightly enlarge the left eye with detail further on. I deepened the undertones of the hair and dithered about whether to deepen her hair colour above as well. I faffed around with her skin tones and created some shadows and highlights and added in some magenta to her cheeks very blended and pale. This was the point yesterday afternoon where I decided i need to take her home and finish her with some supplies i had in my studio.

And here she is finished! I also photographed her outside in good light this time so you can really see the shading and highlights on her face and the details that may have been missed in the indoor environment of the previous photos.

I've added in a lot more shading with prisma pencils, on her face and detail in her wings. I also added in watered down high flow nikel azo gold to finish her hair, finally deciding to have it harmoniously blend with the under hair.

And when i was finished with all of that i really felt to draw a city behind her! i took a few prismas out and sketched in some details. then decided that i wanted them to not stand out and kind of look like they are bathed in light and far away

and finally lastly, I added in the eyelashes! my canefields students will understand how funny that is! 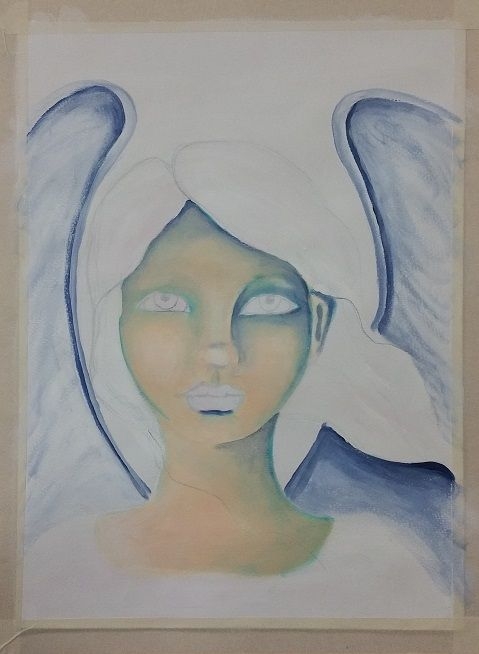 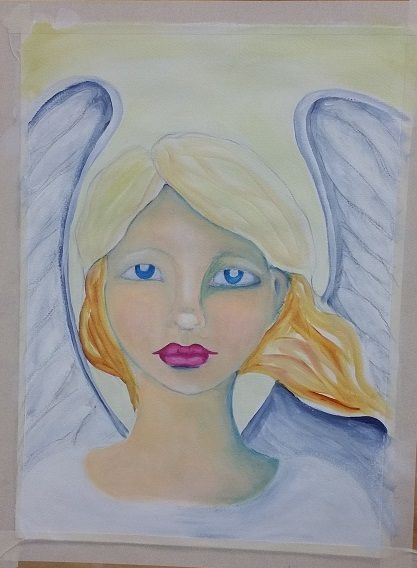 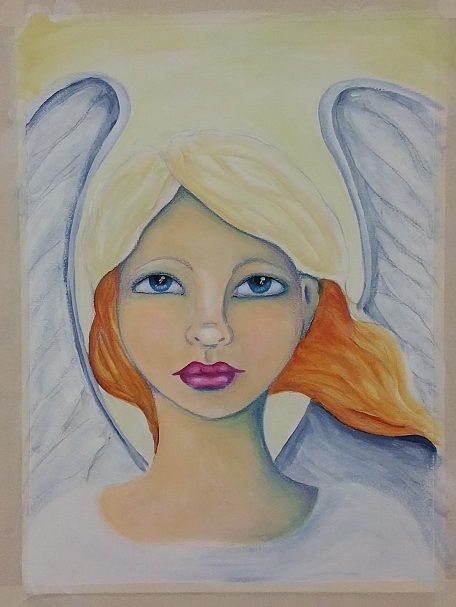 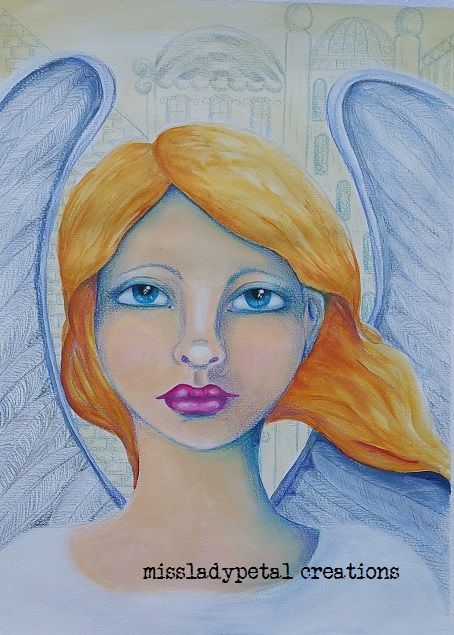